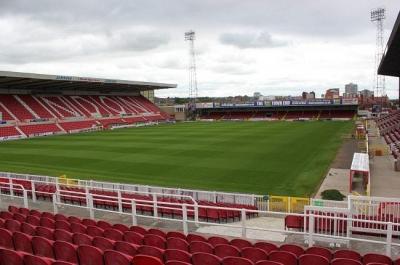 Notts County have ended 2017 on a sour note as their unbeaten run in League Two came to an end in a 1-0 defeat at Swindon Town on Saturday.

In an uninspiring first half, the Robins got the ball in the back of the net with the first real sighting of goal for either side on 12 minutes, but it was ruled out for offside.

Amine Linganzi connected with Ellis Iandolo's free kick on the volley and sent the ball beyond Ross Fitzsimons, but the midfielder was in an offside position and the goal was disallowed.

Shaun Brisley then hauled down Kaiyne Woolery 20 yards out for another opposition free kick, with a low drive from Luke Norris met by a good save from Fitzsimons down to his left.

County's best chance to take the lead fell to Jon Stead, who met Liam Walker's cross with a diving header that flew straight at Reice Charles-Cook in the Town goal.

The second half saw Swindon take the lead just a minute after the restart as Norris received a cut-back from Anderson on the left and rolled the ball past Fitzsimons from 12 yards.

Woolery sought a second for David Flitcroft's five minutes later when he surged forward from halfway, held off Elliott Hewitt and fired from the edge of the box, but it flew into the side netting.

Fitzsimons was again the next keeper to be called into action as he pushed away a dipping 25-yard free-kick from Iandolo midway through the half.

County tried to build pressure in an effort to force an equaliser in the closing stages and almost grabbed one with virtually the final kick of the game.

However, Charles-Cook produced a smart save to tip over Brisley’s header from a corner and condemn Notts to defeat in their final outing of the calendar year.